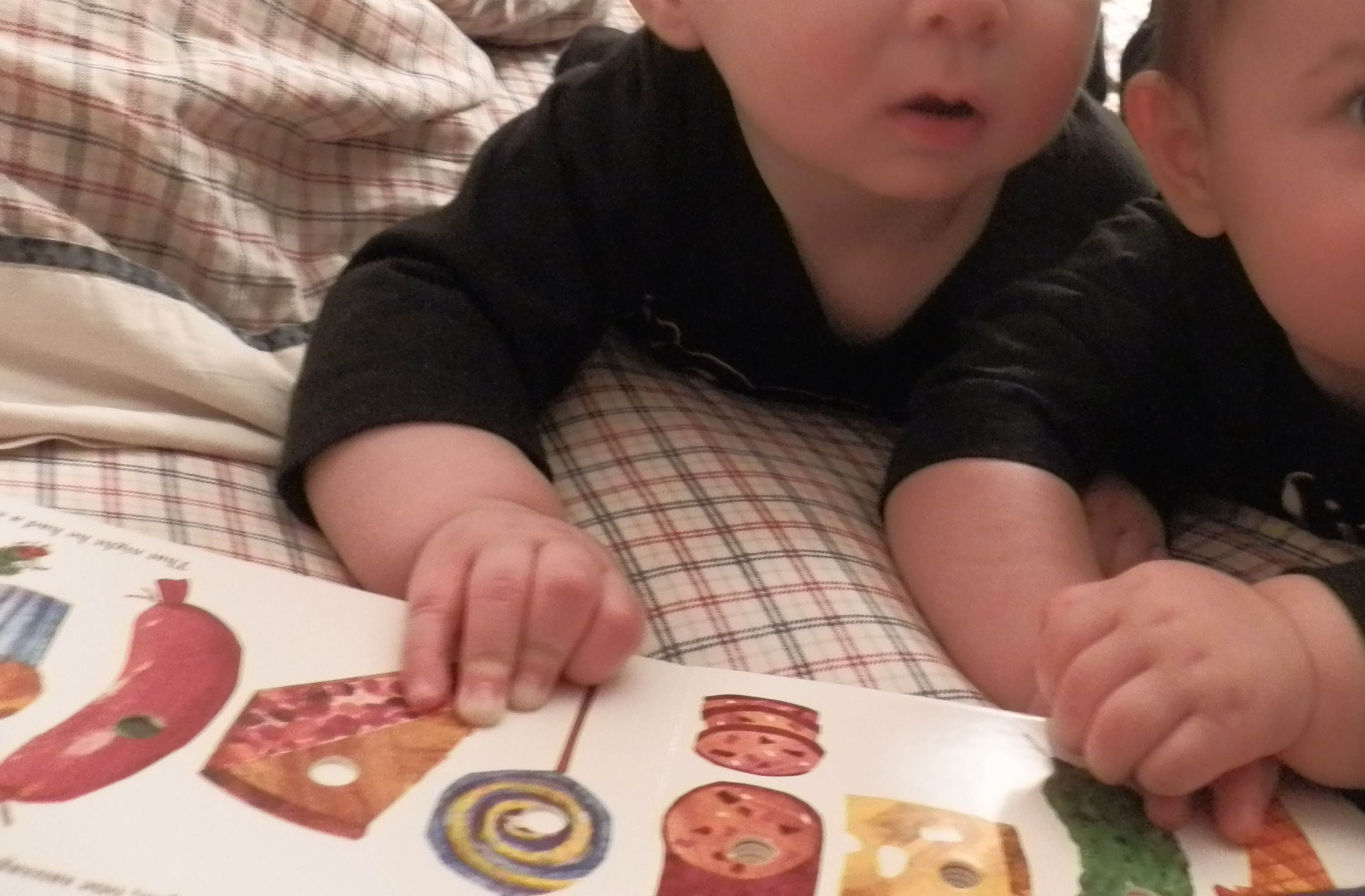 Deep in the third trimester of my twin pregnancy, I arrived in the 'decorator' stage of nesting and pasted Very Hungry Caterpillar decals all over the nursery walls. So maybe it goes without saying that I came to Eric Carle as a fan first and a parent second. In the days after we brought the boys home, "The Very Hungry Caterpillar" became Luke and Harry's first book, nabbing a permanent spot in the bedtime rotation.

Carle's books all feature animals, a solid choice for most children. But what distinguishes his approach is a disinterest in anthropomorphizing. They might be "Very Lonely" or "Very Hungry" to drive the plot along, but his protagonists don't have people-names, people-goals, or people-conflicts. In many books, they don't speak. Instead, his stories approach the category of narrative nonfiction, bringing children into the drama of the natural world.

Eric Carle is renowned for his art. His signature technique, cutting hand-painted paper and layering it, is completely captivating and unusual, and yet not too abstract for toddlers with ASD who may need extra practice learning to identify animals. His books also include sensory elements such as lights, sound, unusually shaped pages, or integration of other materials and textures. This makes them ideal for the libraries of sensory-seeking children.

In "The Very Hungry Caterpillar," for instance, there is a section in which the caterpillar eats through 1 apple (on Monday), 2 pears (on Tuesday), 3 plums (on Wednesday), 4 strawberries (on Thursday), and 5 oranges (on Friday). Most of the time, I would worry that this is too many ideas for one short passage: days of the week and counting and labeling different fruits? Yikes! But because the design includes smaller pages that increase in size, as well as "eaten" holes to poke a finger through, a toddler can follow the gluttonous caterpillar on a tactile journey, and it actually works.

Wonderfully, Carle's books often include urban animals, particularly insects, and this, I've learned, is unexpectedly critical. I have developed something of a bee in my bonnet about how children's literature tends to focus on farm and wild animals. It drove me crazy that, living in New York City, Harry could confidently label a flamingo but not a pigeon, or that Luke could proudly tact a tiger but not a squirrel.

I appreciate that kids with ASD need to learn the words for farm and wild animals too; these are appropriate and necessary educational goals. Even if a child never actually sees a real tiger, knowing about tigers gives a kid access to the common language of English-speaking culture and early childhood education. However, this is often done to the exclusion of common urban animals (aside from pets), which doesn't consider that our kids are likely to need a lot of extra help acquiring language to describe their natural environments. Some of the most popular Eric Carle titles are perfect tools for addressing this gap, featuring spiders, fireflies, ladybugs, crickets, caterpillars, bees, and more.

A final recommendation if you happen to live in New York City, London (UK), or Sydney (Australia) is to use familiarity with "The Very Hungry Caterpillar" book to help your child get practice attending a theater performance! When I discovered the existence of the The Very Hungry Caterpillar Show, a live children's theater performance featuring 75 puppets, I was more than a little excited at the opportunity to use a beloved, familiar book to promote such an important social skill.

We took Luke and Harry to an autism-friendly showing during which the production team kept the house lights half-dim and the volume down. It was great to be in a non-judgmental audience with other ASD families, and because the boys knew the story, they were much better able to sit in their seats and be part of an audience. Harry, in particular, was enthralled and anticipated everything, shouting out lines along with many other kids in the audience while clutching his (free!) caterpillar doll. 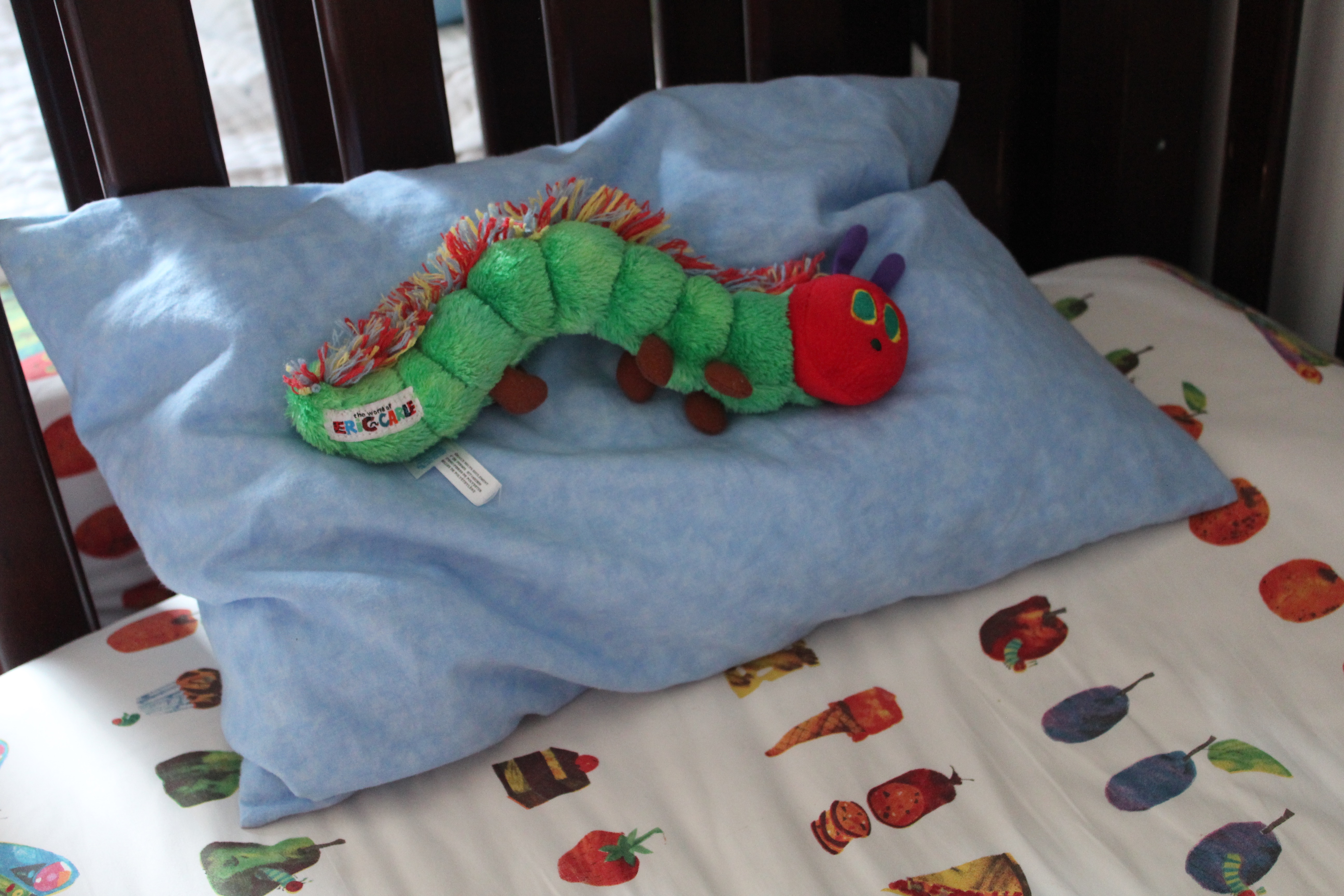 Luke mostly sat on my lap and required edible reinforcers, but had tear-inducing (for the moms), moments of engagement for what was happening on stage, particularly during the sections involving the caterpillar. The show features three other Carle books to study up on in advance: "The Very Lonely Firefly," "The Artist Who Painted a Blue Horse," and "Mister Seahorse." As I'm posting this, New York City and London have a waitlist for their shows.

"The Very Lonely Firefly," The Artist Who Painted a Blue Horse," and "Mister Seahorse" deserve their own posts, but much of what I said above applies to all Carle books, and I cover their individual strengths and weaknesses briefly below.

The Artist Who Painted a Blue Horse

1. From Eric Carle's FAQ section, in answer to the question: "Why does Mister Seahorse look different from some of your other books and why isn't there an acetate sheet after Mr. Pipe?", Eric Carle writes: "In most of my books I tend to disrupt the pace and rhythm of the story toward the end so as to signal to the reader that the book is coming to a close." (retrieved 4/13/26) ↩

2. I am so bothered that Carle won't fix the glaring error he made when he put the caterpillar into a cocoon (what a moth emerges from) instead of a chrysalis. Every year millions of children incorrectly learn that butterflies come from cocoons and I doubt most of them ever unlearn this. It's a completely fixable problem for new editions, and I'm really disappointed that Carle continues to double-down.