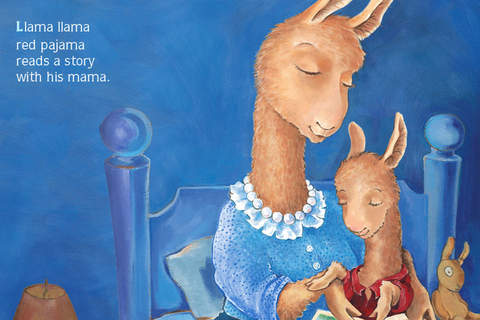 After I heard of your passing yesterday, I read online that your last wish, instead of a traditional funeral service, was for your family, friends, and fans to read to a child. I want you to know that I read "Llama Llama Misses Mama" and "Llama Llama Red Pajama" to my son Luke last night. It was a special reading, in your honor.

And I want to tell you a little bit about Luke.

Luke is 3, almost 4. He loves trains and Pixar movies. And he loves the playground. He also has autism and it's really, really hard for him to attend to an adult reading a book. I know that this just makes reading regularly to him even more important. I'm sure, as a former preschool teacher, and as a mom, you'd agree.

Last year, one of his therapists spent a lot of time conditioning specific books for him. She'd pop bits of snack food in his mouth as a reward for looking at a book, even for a second, while it was being read, and constantly soothed him, rubbing his back and telling him how good he was for sitting nicely. It wasn't easy.

"Llama Llama Red Pajama" was one of the books she chose--and he ignored it at first. In fact, regular readers may recall that I previously reviewed it in "Goodnight Noises Everywhere," June 21, 2016, a round-up of my 4 favorite bedtime stories, and at the time that only his twin Harry seemed to like it. But by July, above all other books his therapist was reading to him, something clicked between Luke and Baby Llama. By August he requested it from me every night before bed. We'd read it once. Then he'd request it "again." And then "one more time."

Fast forward. When we read it now, Luke fills in the ends of lines. ("Mama's at the kitchen..." "SINK!") He loves the scene with Baby Llama pulling the covers up over his face (Eyes wide open, covers drawn... What if Mama Llama's GONE?) and he copies the action in your illustration, pulling the blanket over his eyes and popping them wide. He calls out, "Run! Run! RUN!" as Mama Llama bounds upstairs during the climax. And when Baby Llama gets two kisses at the end, Luke tucks himself into bed, looks directly in my eyes, and giggling, waits for his two kisses too. 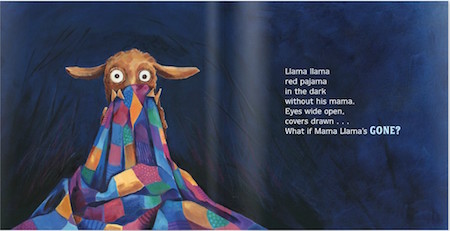 Many who meet Luke think he is totally nonverbal. He isn't, but getting this much language out of him is rare and precious. In his twice-a-week preschool last year he had to be held in place, often struggling, during storytime by his therapist. For your book, he sits calmly next to me, eagerly turning pages to get to his favorite parts. Last year, he spent months doing gross motor imitation programs with therapists learning how to blow a kiss or high five, actions that most kids pick up easily as toddlers. But here he is now, picking up "covers drawn," a pretty unusual action, from an illustration. And intraverbals--that skill of finishing lines that another human starts for you? Wow. That requires social language skills that are really, really hard for kids like Luke. Finally, there's this business of pretending to be Baby Llama and play-acting the end of the book with me. Forget about it, Anna. I have a hard time not crying when he nestles in and "snuggles pillow soft and deep." 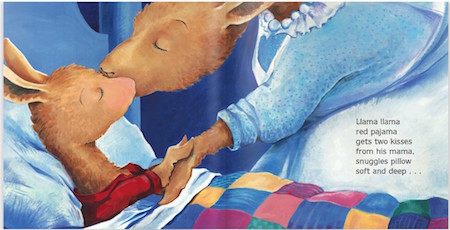 Yesterday, Luke began attending a new, intensive special education preschool. For the first time, he is not learning at home with teachers he knows well, and his twin brother isn't with him. He and I get there by taking a city bus a fairly significant distance. It's a big deal. A massive change for any 3-year-old, forget a child for whom a slight change in routine can be earth-shattering.

Parents of typically developing preschool children spend their Augusts talking about school and explaining to their children what to expect; soothing anxieties. I can't do that. He doesn't have enough receptive language to understand me.

In mid-August, my sister gave "Llama Llama Misses Mama," your book about how scared Baby Llama was to start preschool, to Luke as an early birthday present. We began reading it every night, and Luke not only seemed interested (without conditioning!), but began requesting it too.

When he was crying in front of the new school building yesterday, I gave him a few favorite toys to hold and whispered: But don't forget. When day is through. She will come right back to you.

To my astonishment, that's all it took. Luke stopped crying. A minute later, he walked inside the front door as his new teacher and I shared a grin.

Later that day, I read that you had died, and I've been thinking about you ever since. You continue to do so much for my son. From the bottom of my heart: thank you.

The Publisher's Weekly article announcing Anna Dewdney's death, mentions that Netflix is creating an original animated Llama Llama series due out in 2017.

For my regular readers, a quick summary of what's to love about the Llama Llama series:

The Llama Llama picture books all have a relatable animal character, rhyme, use lots of repetition, and have gorgeous illustrations. They are social stories with subjects of particular interest to parents of children with autism, tackling common anxieties around change and transition and difficult social and community situations. The narrative arc provides empathy for the child while modeling appropriate behavior and coping strategies:

Llama Llama Time to Share - about how sharing is hard, but rewarding

Llama Llama and the Bully Goat - about bullying

There are also many fabulous Llama Llama board books for younger children.