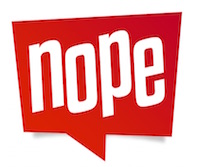 At our baby shower, Janet and I received a copy of "Pat the Bunny" from a well-meaning friend, which we quietly got rid of that day. Sure, it's a classic, but when two lesbians are expecting, is a book that asks baby to "touch Daddy's scratchy face" really your go-to?

So began my tumultuous relationship with board books. And while my initial peeves had more to do with representational bias, after my twin sons were diagnosed with autism I became laser-focused on function. A surprising number of bestselling books for toddlers totally flopped with my kids.

This blog is normally about the books that are winners. Today I want to talk about some of the losers. 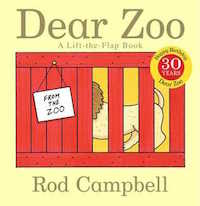 "Dear Zoo" and its ilk can be found in most toddler home-libraries. Lift-the-flap proponents tout this category of book as great for fine motor practice. And that is true. Kids with fine motor delays get lots of practice ripping the crap out of these books when they are unable to modulate how hard they pull the big, flimsy, paper flaps open.

For a child without significant receptive language or a clear understanding of cause-and-effect, it may not be possible to explain why or how not to rip the book. So now the book, which you have owned for minutes, is torn to shreds, and your child is having a meltdown because...
(a) you tried to stop them from ripping the book, or

(b) you tried to hand-over-hand how to use the book gently, or

A half-dozen book-tape repair jobs later, you buy the book again because you are a sucker your child loves the stupid book. This vicious cycle repeats until you have spent over $25 on a $4 board book and you finally realize: There are better ways to get fine motor practice.

2. A is for Activist and all the books you buy for yourself on your sad progressive parent cred-quest.

Because I'm a longtime political activist, my boys were given no less than four copies of "A is for Activist" before they turned 2. I dug it at first. It was nice to imagine I could introduce my kids to progressive ideas from the get-go.

And I do love a good alphabet book. We are all about "Chicka Chicka Boom Boom" these days, and I reviewed "Dr. Seuss's ABC" a few weeks ago. Alphabet scripting is a common problem for kids with autism, and lots of variation helps.

Unfortunately, this is how "A is for Activist" reads:

It's hard to know where to start.

(a) There are far too many long, inappropriately advanced words on each page. In the above excerpt, not a single word can be found on the Dolch or Fry pre-reading word lists for preschoolers.

(b) The images often don't provide meaningful context. The "Q" page shows a drawing of children, arms raised. But they look like they are waving hello, not asking a question.

(c) There is no repetition of any particular word or phrase from page to page to anchor a child lost in a sea of SAT words that never recur. Nor is there any overarching rhyme or meter pattern to connect to.

It's marked for ages 0-3, but "A is for Activist" is developmentally insane for the entire category of "child." No toddler has a snowball's chance in revolutionary Mexico of understanding what "Z is for Zapatista" means.

3. The Mini Masters series and any other book predicated on the subtle appreciation of art movements. 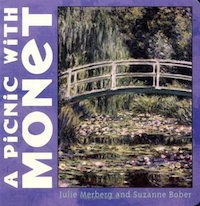 Kids with autism often have an affinity for pictures over language. Temple Grandin famously compares her own brain to Google Images, and talks about "thinking in pictures."

Visuals matter, and I've found that the art that works best isn't chaotic or confusing to look at, but rather distinguishable.

To practice labeling and tacting, kids with ASD tend to need many extra learning opportunities, so it's certainly therapeutically beneficial if they can easily see the elements on a page. But besides educational concerns, there are sensory ones. If the image is very confusing or "noisy," the child will likely either (a) stim off the image or (b) become overwhelmed. This may sound limiting, but it's normally not a problem.

Each book in the Mini Masters series features a different artist and an original poem. The poems are boring, but passable. The art is the problem. It's blurry and uninteresting.

"A Picnic with Monet" is my least favorite in the series. It includes a few pictures of blurry bridges, a blurry field, some blurry white birds (turkeys), some blurry white flowers (water lillies) on a blurry pond, and other blurry things. And if you think "blurry" is overused here, remember that this is Impressionist art: It is meant to be messy up-close!

So even when I heavily prompt ("A bridge!"), they can't see it and don't give a crap enough about whatever (bridges, etc.) to feel motivated to try. All I get is a child bored to (actual) tears, (literally) throwing the book across the room.

4. The Potty Book for Boys and every other book that sends my kids the message that there is something wrong with them. 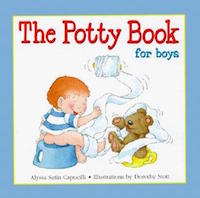 Potty training often happens much later for developmentally delayed kids. But before I understood and accepted this, I tried to train "on time." In my mix of failed tactics, I read them lots of boring potty books as social stories.

"The Potty Book" isn't ground-breaking; it's weirdly gendered (the edition "for girls" swaps blue for pink, and Hannah for Henry), doesn't teach the mechanics, and features a kid who basically self-trains--which is unrealistic for most children.

What the book tries to do is foster a thirst for independence. And it sets this up by having Henry list all the things he can do all by himself: eat breakfast, brush his teeth, pick out his clothes, and get himself dressed.

I choked up hard when I hit these pages. At the time, Luke and Harry could do almost none of these things.

I don't have a problem with books in which kids do things that Luke and Harry can't yet. That's the real world, and modeling skills from others is the jewel in the educational crown of social learning, and I want to encourage it as much as I can. But "The Potty Book" implies that the reader should be capable of these things already.

Assumptions about what is normal lead to the manufacture of shame in children with disabilities. But, honestly, I had a hard time figuring this one out, and it took me too long to throw "The Potty Book" away. Before my brain realized this had the potential to do my children long-term emotional damage, its presence on their shelf was an itch I couldn't scratch. I'm learning to respect that itch.

Luke and Harry didn't even notice, of course, but eventually (sooner than I'd like) they may begin to feel badly when faced with the implication that they should be able to do something they can't yet (or ever) or when it's unkindly emphasized that the way they do something isn't how most kids do it.

I'm in a support group for parents of kids with autism, and my friends with older children talk about anxiety disorders and depression related to these issues all the time. I can't protect my boys forever, but anxiety and depression shouldn't start at age 3.

5. Love You Forever and books that model wildly inappropriate behavior. 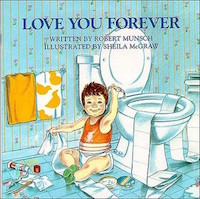 While not in actual board book format, I am including "Love You Forever" because it's in the "Mommy/Daddy loves you so much!" subgenre of books meant for the same age group.

When I was home a few years ago, I snagged my childhood copy of "Love You Forever" because I generally adore Robert Munsch (I wanted to be Angela from "Angela's Airplane") and I nostalgically remembered my mother reading it to me.

Yikes. This book is seriously disturbing. The mother character sneaks into her son's bedroom to pick him up, rock, and sing to him as he sleeps through all stages of his life: infancy, toddlerhood, his teenage years... and on into adulthood. Yep, when he's grown up and living in his own home, his mother drives across town with a ladder roped to the roof of her car... and breaks into his house at night.

If you aren't convinced this is wildly, inexcusably inappropriate, try swapping the genders and picturing a man break into his adult daughter's home and bedroom so he can pick her up out of her bed and rock her in his arms while she's asleep.

Since autism is, at it's heart, a developmental disorder of the social variety, I take it very seriously that part of my job is to help my kids understand what appropriate social interactions look like and what they don't look like--which obviously includes consent and physical affection. So while for typically developing kids it might (?) be okay to read the book and then explain that it's make-believe and silly and really meant as a metaphor for how parents will always see their children as their precious babies, but that in real life no one, even a relative, should creep into your room while you are asleep and touch you... Yeah, my kids take things more literally. We don't have nearly enough pragmatic language to have a nuanced post-game conversation.

"Love You Forever" is still on my bookshelf (not theirs) because it's from my childhood and I can't bring myself to get rid of it. But it's going back to my mom next time I see her. I won't be reading it to my kids.

What super-popular board books bombed with your ASD toddler? Tell us about it in the comments and spare us all from making the same mistakes!